Are cryptocurrencies safe? That’s been the subject of debate in financial circles since day one, when Bitcoin became mainstream in the early 2010s. Well, thanks to the use of blockchain technology which is viewed as one of the most secure platforms in the tech scene, there is a lot of confidence in cryptos security-wise. The level of trust people have in cryptos has led to their speedy adoption as a payment option on different platforms, both online and in retail. In Canada, for instance, you can use cryptocurrency in real online casino Canada sites, pay for airline tickets on Euro Pacific, Alternative Airlines and Webjet or even buy pizza at Hellen’s Pizza and Dominos.

However, cryptocurrency users often rely on third-party wallet providers – which introduces the insecurity variable. Due to security loopholes on platforms that handle digital currencies, cybercriminals have conducted some insane rip-offs that left our heads spinning. Here’s a lowdown of the biggest heists in the history of cryptocurrencies:

The biggest crypto hack has happened this year, in 2022! Can you believe that? It seems that the hackers are getting more audacious as the days go by. Ronin, the blockchain project that powers Axie Infinity, a widely popular NFT-based video game, was hacked. The hacking led to a loss of a whopping $625 million from Ronin’s systems.

Through a blog post, Ronin explained that the hacker had stolen its private keys and passwords to gain access to the crypto funds. After initial investigations, FBI investigators revealed that Lazarus Group and APT 38 cyber groups, all associated with North Korea, were involved in the heist.

On August 10th, 2021, Poly Network announced what was then the biggest crypto hack of all time. If you are not familiar with Poly Network, it is a Decentralized Finance platform (DeFi) that facilitates peer-to-peer transactions. The platform disclosed that the network had lost $610 million to an undisclosed hacker.

However, the Poly Network hack is different from the others in this list because the hacker returned all the funds he had stolen. The hacker referred to as “Mr. White Hat” claimed he was an ethical hacker whose aim for the heist was to expose security vulnerabilities. Interestingly, after the hack, Poly Network proposed a job offer to Mr. White Hat, trying to woo him to become the Chief Security Advisor of the company.

Cryptocurrency exchange Coincheck suffered a $500 million NEM coins loss in 2018 when hackers somehow made it into their systems. The heist was discovered 8 hours later when the company noticed an abnormal balance decrease. It is still not clear how the hackers made it to Coincheck’s systems other than the fact that this hack was not an inside job.

Eventually, the Tokyo-based exchange company admitted to a security lapse that led to the loss of funds, and to date, the funds have never been recovered. However, in January last year, around 30 people were charged in Japan with trading almost $100 million, which Japanese authorities believed to be part of the funds stolen in the Coincheck hack.

This is a case of another Tokyo-based exchange that took place in 2014. When the hack happened, Mt. Gox was the biggest crypto exchange globally. Unfortunately, the incident led to the loss of $460 million for Mt. Gox, a blow so devastating that the company ended up filing for bankruptcy.

However, from what industry insiders said then, the fall of this exchange was inevitable based on how the company handled its operations. Many described the operations situation in the company as dire, with a glaring lack of professionalism and expertise. The company went into liquidation immediately after the hack, and investors could only recover 200,000 of the stolen Bitcoin, which was worth about $170 million at that time.

2022 has another entrant into the list of hacking shame with another Decentralized Finance platform (DeFi) making an appearance. On February 2nd, 2022, an attacker exploited a security flaw in the Wormhole systems to break away with $325 million. The incident pushed the company to offer a $10 million ‘bug bounty’ to the hacker for details of the attack and to restore the stolen cryptocurrency. Barely 24 hours after the hack, Wormhole reported that all the stolen funds had been restored.

As the years go by, it seems attackers are getting bolder with the heists as they target larger sums of cryptocurrency with each new monster hack. Here is a tabular highlight of the top 10 biggest cryptocurrency heists in history, starting with the five we’ve already discussed. 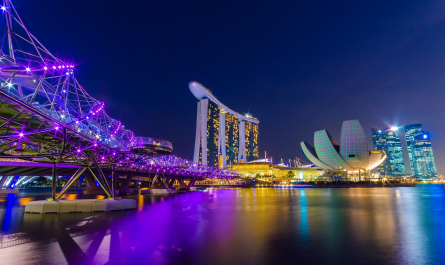 Which currency pairs are the best for Singaporean traders?

Considering Starting an Online Business? Here’s what to Keep in Mind

How to enhance your personal loan eligibility chances?